On 6-9 February, in the Sports and Entertainment Hall in Zielona Góra, the team of Polish tennis players fought for promotion to the World Group of the Federation Cup. In the tournament, apart from the Polish women’s representatives also Bulgaria, Denmark, Estonia, Russia, Sweden and Ukraine took part.

The International Tennis Federation (ITF) awarded Poland the organization of these largest cyclical women’s team tennis tournament and this event took place here in Poland for the first time in history.

Together with the hummel company, we ensured that our girls look phenomenal on the court.

Especially for Polish tennis players for the Fed Cup we created a hummel designed by UpToU Collection, in which we combined national colors with elements of symbolism, such as eagle, claw or hussar wings.

The whole collection was supposed to distinguish the players by an unusual and modern cut, as well as give the representative outfit a subtle predation.

Knitted fabrics, from which we sewed the costumes are breathable, they fit perfectly to any figure, and at the same time are very comfortable for the body.

For the first time we had a chance to see the players in our outfits during the training and we couldn’t stop smiling to each other. It was different to see ready clothes, and it was something else to see all the tennis players and coaches in uniform white and red sets. The impression was one – a dozen or so people forming a unified team, which stood out very positively from all countries participating in the Fed Cup.

We were very happy and proud, because by supporting the girls through functional and stylish outfit we could be together with them on the court.

Our young team did their best, and even in those matches that were finally resolved to their disadvantage, the girls fought fiercely to the very end, and the opponents had a difficult nut to crack. 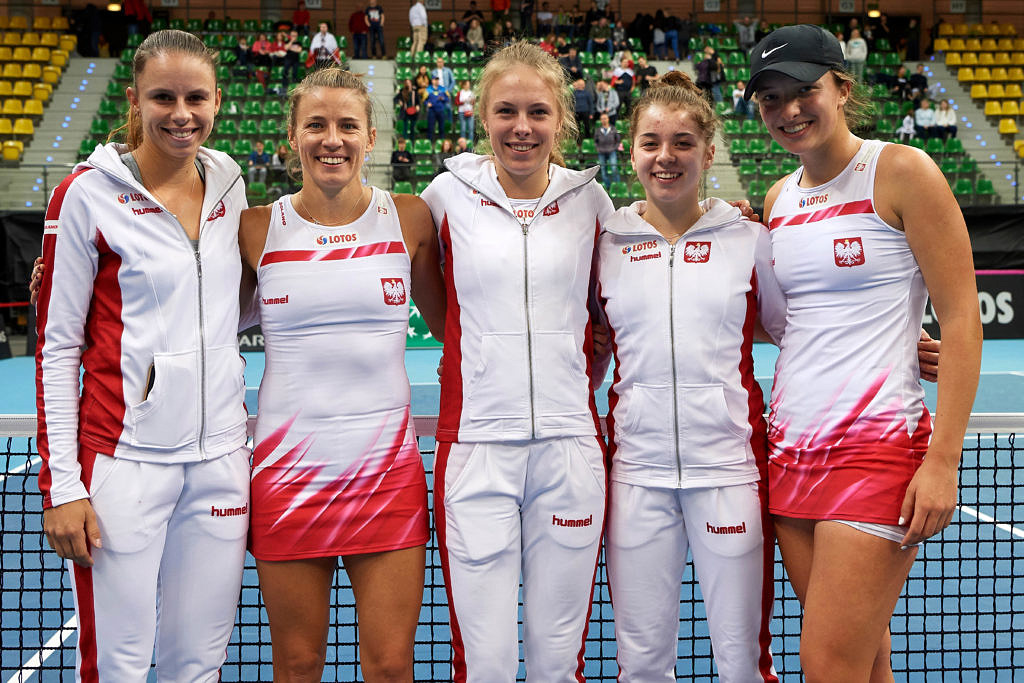 They played in the Tournament:

MAGDA LINETTE  – For her 26th birthday she made a herself a gift of the highest WTA ranking so far. After Agnieszka Radwańska’s career ended, she became the highest ranked Polish tennis player and during the Fed Cup in Zielona Góra she played the role of the first Polish tennis racket. Multiple Polish champion in singles, doubles, mixes in all age categories and a gold medal winner in the Women’s Polish Team Championships (representing the colours of the WKS Grunwald club).

ALICJA ROSOLSKA – As an experienced doubles player she was a great support for her colleagues in all the matches. She has had the best season of her career behind her, also ending with the highest place in the WTA ranking so far. In 2018, Alicja Rosolska advanced to the semi-finals of Wimbledon doubles and the final of the US Open mix. Each of the eight WTA Tour doubles titles she won with a different partner. She is a record holder of the Polish national team in the number of doubles victories in the Federation Cup.

IGA ŚWIĄTEK – She could still play in junior tournaments for the rest of the season, but in 2018 she finished her performances in this age category. The semi-finals of single and Roland Garros’ championship in doubles, Wimbledon’s championship in singles and the gold medal of the Youth Olympic Games in doubles – these are just the most important achievements of Iga Świątek in the competition up to 18 years old.

MAGDA FRĘCH – She made her WTA ranking debut when she was exactly 15 years old and 4 months old. For quite a long time she was the youngest Polish woman to be classified on this list. It took her less than a year to get promoted to the Top-500. In the Polish fedcup team she played for the first time in April 2016 (play off World Group II).

In the Fed Cup competition the Polish players lost 1:2 to the Russians and won with the Danish 3:0. They remained in Group I E-A. In the match for third place they have beaten Ukrainians 2:1.

The tournament of Group I of the Euro-African Federation Cup in Zielona Góra ended with the victory of the Russian team, which in the final deservedly defeated Sweden 2:0. The winning team advanced to the barrage for World Group II.

It happened a lot!

The atmosphere during the games with the participation of the Polish team reached zenith, it was very loud and supportive. It is also impossible not to mention the excellent organization of the event, which made it easy to fully focus on the matches and cheering.

To quote the President of the PZT, Mirosław Skrzypczyński, “such a tennis event has long been missing in Poland!

We sign this sentence with both hands and we are very happy that we were lucky to be part of this great sporting celebration.

The author of the photos of the representation is Adam Nurkiewicz

Be the first to know about our brand new collections, events and promotion offers

Discount cannot be used together with other price promotions